Living in a skyscraper, a sign of modernity in the big cities 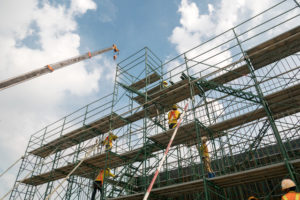 Urban needs grow along with the great cities. The main metropolises of the world are in constant competition to attract investment and talent and generate sources of work of the highest level. In this race, the skyscrapers have played a decisive role.

Some real estate agents say that the experience of living in a skyscraper is like being a King in the XXI century. Just few people, a very exclusive group, own their homes, sleep in luxury rooms or work at the heights of the cities.

From America to Asia, skyscrapers stand out in the most developed capitals, like New York, Chicago, Dubai, Shanghai, or Seoul, as they not only serve as housing but are also business centers where many companies hold their headquarters.

“We have seen, in the past 20 years, a withdrawal from society into the private sphere, and towers are an easy way to achieve that,” said Jan Gehl, architect and urban design consultant, to The Guardian.

In New York, from one of the tallest apartments of Park Avenue, all of Manhattan to Harlem can be seen easily, even Central Park as the city’s lung, and iconic buildings such as the Empire State, the World Trade Center Memorial and the Statue of Liberty. This is one of the most significant benefits of living in a skyscraper.

However, although many say that living in the heights means tranquility, some might not have a good time standing in a 64th floor. A study carried in Canada, published by the St. Michael’s Hospital, revealed that heart attack victims have fewer chances of being treated rapidly if they are located in the highest floors.

Living in a skyscraper and being safe

Nowadays, skyscrapers are more than pretty structures. Thanks to technological advances in constructions, they count with security systems that protect them against natural phenomena and terrorist attacks. Humanity has been building tall buildings for more than a century, and that experience has helped to improve design whether structurally or ornamentally.

Built in 1885, and with 42 meters height, the Home Insurance Building in Chicago was the first tall building to have steel structures in its framework. Others followed the example of the Chicago School that combined ornament with modernity before the entrance of the 20th century.

Since the attack of the twin towers from the World Trade Center in New York, on September 11th of 2001, architects and engineers have been working hard to improve the evacuation exits in case of fire. As reported in an article from the Telegraph, Dubai, a city full of skyscrapers, is one of the cities that has the most advances in security technology. The Burj Kalifa, a skyscraper of 168 floors, 828 meters, and the tallest skyscraper of the world, counts with sheltered areas in each level where people gather to go down to the ground floor in special lifts called “lifeboats.”

Buildings that surpass the clouds

Within the past 14 years, the race of skyscraper construction has been frenetic. There are 82 buildings that are taller than 295 meters, and most of them are in the Asian continent.

The Shanghai Tower, in Shanghai, is the second tallest building in the world with 632 meters. It is followed by the Makkah Royal Clock Tower, in Saudi Arabia, with 661 meters.

__
ScaffoldsSupply.com! Your source for all industrial scaffolding and accessories